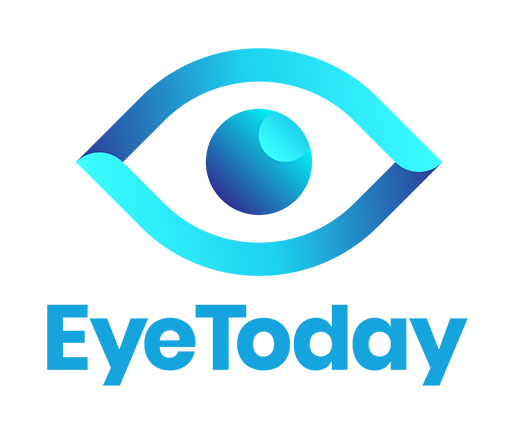 Assessment of peripheral retina is essential for diagnosis of various retinal diseases and their subsequent management and follow up. Conventionally, this was possible in past only with the help of Indirect Ophthalmoscopy (IDO) with the possibility of inter observer variability. For documentation, the traditional ETDRS seven standard field (SSF) imaging includes the central posterior 90° of the retina, which equates to about 30% of the entire retina surface and is time consuming to capture several 30 degree fields.1 Wider field cameras may offer an increase in visible retina, but still require multiple images montaging to provide an ultra-wide field (UWF) view. Recent advances in fundus imaging have allowed ophthalmologists to capture UWF images up to 200° of the retina in a single capture which equates to 82% of retinal surface.

International Wide field Imaging Study Group of retinal imaging experts proposed the definitions based on anatomic landmarks.2 Wide field image includes a single-capture image, centered on the fovea and includes retinal anatomic features beyond the posterior pole, but posterior to the vortex vein ampulla, in all four quadrants. UWF image was defined as a single-capture image, centered on the fovea, which captures retinal anatomic features anterior to the vortex vein ampullae in all four quadrants. This group also noted that images from the Optos retinal imaging system most consistently provide a complete view of the vortex veins and retinal periphery without requiring montage in less than 0.4 seconds. Additionally, the Optos montage feature increases the portion of the retina that can be captured to 220˚ (or 97%) of the retina by combining four gaze-steered images (up, down, left, and right)

Optos UWF retinal imaging device achieves a wide field of view of 200˚ without mydriasis. This is due to a unique optical system utilizing an ellipsoidal mirror, which has a concave three-dimensional shape, and laser light that is reflected on this mirror which subsequently scans the retina through the pupil. Optos incorporates Dual frequency scanning laser technology of 532 nm and 635 nm which enables the Optos 3-in-1 color depth imaging. Also, high-end equipment employs a blue (488 nm) and infrared (802 nm) scanning laser for FFA and ICG angiography respectively.

Optos UWF system provides ability to capture images in presence of most cataracts and vitreous opacities in non mydriatic manner through 2mm pupils. Since image capture time is less than 0.4 seconds and provides non mydriatic diagnosis, waiting time of 30 minutes to 1 hour after instilling dilating eye drops is eliminated, especially considering current COVID-19 times where minimal outpatient stay is desirable for patients. This system incorporates multiple imaging modalities including color, red free images, auto fluorescence in basic model (Daytona) and FFA, ICG and OCT in other variants (California, Monaco, Silverstone). Apart from being fast, comfortable and convenient for patients due to auto capture option, images are immediately available for review via Optos advance software. This software is provided with features of gamma and blend correction which help to enhance image quality and also assess choroidal features respectively. Moreover it helps to simultaneously compare images captured serially and thereby makes patient counselling easier, allowing them to return to everyday life right after assessment.

A possible limitation of UWF imaging was inaccurate measurements due to representation of a three-dimensional image on a two-dimensional flat surface. The common representation of the world on a flat map, called a Mercator projection, distorts the size of land masses closer to the poles. The type of distortion seen in a Mercator projection is also a problem in retinal imaging.3 This has been overcome by Optos using ProView, a measurement algorithm that enables users to measure distance and area anywhere on the retina, even in the far periphery. Other limitations of current systems include inability to capture entire retina from ora-to-ora in single image, pseudo color imaging and lash artifacts in captured images.

UWF imaging has found to be valuable in the diagnosis and management of patients with common retinal pathologies such as diabetic retinopathy (DR), retinal vein occlusions (RVO), intermediate / posterior uveitis, retinal vasculitis and retinal detachment.

UWF imaging detects peripheral pathology for early disease detection and determination of risk of DR progression (Figure 1). UWF fluorescein angiography (FA) detected findings like ischemic retinal areas in periphery that would have otherwise been missed on SSF imaging in 10% of eyes.4 It is useful for screening patients for DR via telemedicine, particularly with the increasing prevalence of diabetes worldwide.

UWF FA is helpful for retinal vasculitis and posterior uveitis in diagnosis and serial follow up because it increases the detection of bilateral peripheral inflammation and early ischemic areas, thereby predicting the possibility of retinal neovascularization in future (Figure 2). UWF auto fluorescence (AF) is again helpful for serial monitoring of healing of lesions in choroiditis. This AF feature also helps to differentiate choroiditis from diseases such as central serous chorioretinopathy where one can visualize gravitational RPE atrophic tracts (Figure 3).

In retinal vein occlusions, UWF-FA evaluates leakage, nonperfusion and ischemia in both macula and in the retinal periphery. In treatment-naïve patients with BRVO and macular edema, UWF-guided targeted retinal photocoagulation (TRP) may reduce the number of anti-VEGF injections while improving visual acuity and decreasing central sub foveal thickness (Figure 4).5 It also reduces laser induced side effects such as visual field loss.

UWF imaging has been helpful for documentation of rhegmatogenous retinal detachments and their postoperative course (Figure 5). However it failed to detect retinal tears and holes in superior and inferior periphery compared to IDO.

Apart from these UWF imaging has been found to have role in management of pediatric vascular retinal diseases, other vascular retinopathies and age related macular degeneration.

With evolving technology and incorporation of various UWF retinal imaging modalities in a single device platform, it utility will not only help in documenting normal anatomical variations amongst patients but will also help in improving diagnosis and management of retinal disorders. However one has to always remember that UWF imaging is always going to supplement the traditional IDO and not its mere replacement!! 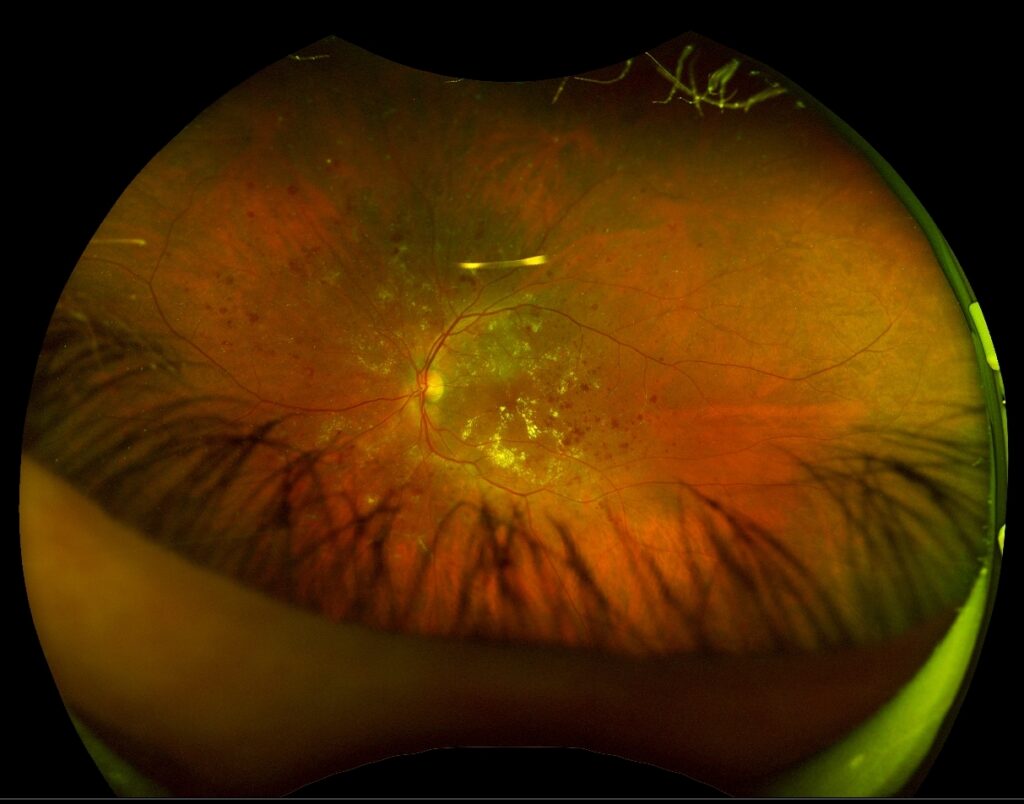 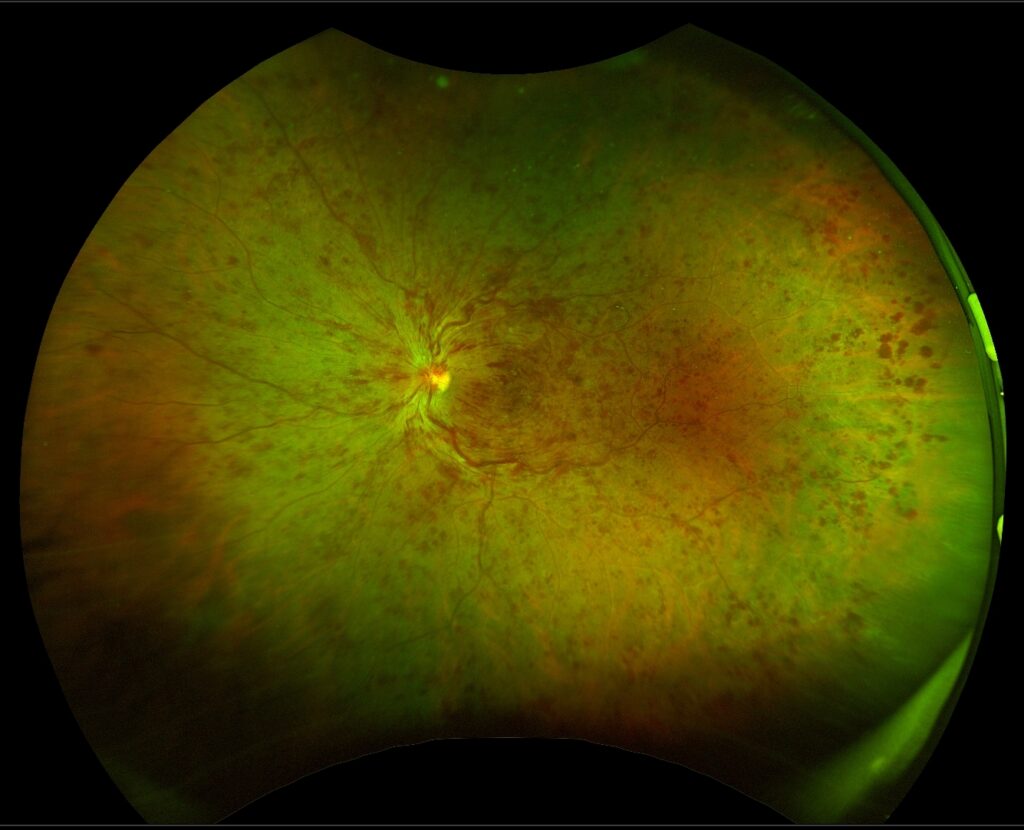